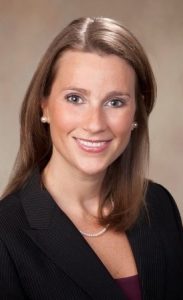 Kristi H. Johnson, of Brandon, is serving as a U.S. district judge for the Southern District of Mississippi.

Johnson, who comes to the court from the Mississippi Attorney General’s Office, where she served as the state’s first solicitor general, said the job really has been a longtime dream.

The dream to be federal judge began when she served as a law clerk for Sharion Aycock, Mississippi’s first female federal district court judge.

“I went to law school to become an FBI agent, and I immediately got sidetracked after I clerked with Judge Aycock,” Johnson said with a laugh. “Through that experience, I realized how critical it is to our system of justice to have judges who will work hard and follow the law.

“Judge Aycock also showed me how to treat all litigants with dignity and respect.”

Johnson received her bachelor’s degree in political science from UM in 2003 and her law degree from Mississippi College. Following law school, she spent some time in private practice litigating in federal court, followed by five years at the U.S. Attorney’s Office. There, she defended the United States in civil actions and prosecuted federal crimes.

“I wanted to build a resume that prepared me for a judgeship if I was ever presented with the opportunity,” Johnson said.

She advises others who want to follow a similar path to always bet on themselves.

“A lot of people might think, ‘I’m not qualified, so I am not going to pursue that opportunity,’” Johnson said. “You may be the most qualified person and you’re just selling yourself short. Don’t do that.”

Hard work got her far once her foot was in the door, she said.

“I had the privilege of clerking for two federal judges right out of law school,” she said. “I can assure you I wasn’t the brightest law clerk they had – my co-clerks were some of the brightest people I have ever met.

“But what both judges will say about me is I was one of the hardest-working clerks. That goes a long way.”

Two months into the job, Johnson said she wanted a judgeship since starting her legal career.

“We hit the ground running Week One, handling both criminal and civil cases,” she said. “All of my colleagues and federal judges here have welcomed me and made sure I have what I need to succeed.”

And she doesn’t intend to leave the job anytime soon.

“This truly was a lifelong dream of mine,” Johnson said. “Every colleague I have interacted with, every single one of them, says that it’s the greatest job on Earth. I believe them.”