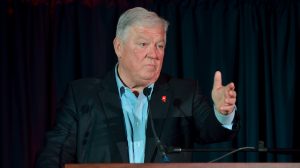 An alumnus of the UM School of Law (JD 73), Barbour started his political career in 1968 as a field organizer on Richard Nixon’s presidential campaign. From 1973 to 1976, he was executive director of the Mississippi Republican Party. He worked closely with many Republican candidates, including Gerald Ford and Ronald Reagan. Barbour served as political director of the Reagan White House and cofounded BGR Group, a government affairs firm.

Presidents Gerald Ford, George H.W. Bush and Ronald Reagan were among the many Republican candidates who received his advice. He served as political director of the Reagan White House and cofounded BGR Group, a prominent Washington government affairs firm.

From 1993 to 1997, Barbour served as chairman of the Republican National Committee and managed the “Republican wave” in 1994, which led to Republican control of both the Senate and House of Representatives.

In 2004, Barbour took office as Mississippi’s 63rd governor. The following year, after Hurricane Katrina hit the Gulf Coast, he earned national recognition for his quick and decisive response to the disaster.

In 2015, Barbour’s memoir was published. America’s Great Storm: Leading through Hurricane Katrina gave his perspective on leadership lessons that came from the storm.