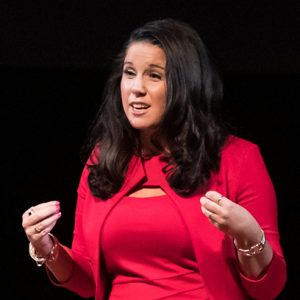 Jenny Ann Urban’s passion for travel and interest in law has led to a successful career as director of aviation relations and compliance at Clear, a growing firm that provides expedited airport security clearances for travelers.

“It’s a huge honor to be included on the Airport Business Top 40 under 40 list,” Urban said. “I’m excited to be chosen and rewarded for the effort, long hours, and passion I have continued to exude within the aviation sector.”

And she’s just getting started.

Having lived all over from Colorado to Australia, Urban resides in Washington, D.C., but claims Oxford as her hometown. She graduated from UM in 2011 with a bachelor’s degree in political science and public policy leadership through the university’s Trent Lott Leadership Institute.

Urban attended the University of Denver Sturm College of Law for one year before returning to Ole Miss to earn her Master of Business Administration, but her passion for law school remained. While working on her MBA, she took a position babysitting for the 2-year-old daughter of Jacqueline Serrao, former director of the Master of Laws in Air and Space Law program at the School of Law.

After learning more about the program and getting to experience aviation law firsthand with Serrao, Urban knew her next steps. She continued her law school career at Ole Miss, focusing on aviation law.

“After getting to work with Ms. Serrao, I knew aviation law was my calling,” she said. “This was solidified by my attendance and speaking opportunities at aviation law conferences around the country.

“I saw her grow as a law student,” said Serrao, now deputy assistant chief counsel for international affairs and legal policy for the Federal Aviation Administration. “She was incredibly inquisitive, and asked very pertinent questions in class.

“She was a strong traveler beforehand, but it became apparent that she was into the legal aspects of aviation as well. I found her to be curious, energetic and exciting, which always makes it more fun for the professors. I’m so happy that she was recognized, but I wasn’t at all surprised, and I’m sure she’ll continue to be recognized throughout her career.”

Serrao added that as a student, Urban served as her research assistant in some international aviation legal capacity-building projects, always taking the initiative to build her learning beyond the classroom.

“Professors at Ole Miss actually care about students and their success,” Urban said. “It is truly the best education you can get.”

The foundation she received at UM prepared her for her career in aviation law, dealing primarily with aviation regulations and security. Urban previously worked as an aviation associate at two international law firms based in Washington, D.C., New York and Charleston, South Carolina.

“Clear is a biometric identity platform that powers secure, frictionless customer experiences in nearly 60 airports and venues for over 4 million members,” Urban said.

At Clear, she oversees aviation security compliance and Transportation Security Administration relationships in 34 airports across the United States.

Urban loves working with her field teams and stakeholders across the country.

“This role has helped me expand my knowledge of security management and risk analysis within the aviation sector,” she said. “I really enjoy working on incident response protocols and emergency management, as you never know what could happen to critical infrastructure within aviation at any time, especially within airports.

“I actually enjoy being on call 24/7. The field teams are the heart and soul of the operation, so I want to be available any time they may encounter an uncommon issue to provide a calm presence and assist in real time.”

Naturally, her job involves travel lots of the time, which she not only loves, but embraces. In 2019 alone, Urban was on 156 flights and spent 136 nights in hotels in 31 cities throughout six countries. But she feels most at home in an airport with a suitcase.

She also has led the company’s initiative to help combat human trafficking.

Expect to hear much more about Urban’s many projects. An industry expert, she is often delivering presentations on new developments. Last spring, she spoke at the TEDxUniversityofMississippi event about “The Future of Aviation – Can Aviation Laws Keep Up?” and has spoken on airport security at international conferences in Rome and Seoul, South Korea.

Her passion and commitment to the aviation industry, during both the good and bad times, illustrate her desire to help international aviation flourish using technological advances to become more secure. No matter where Urban goes in her aviation career, she will always consider Oxford home and be thankful to the university for the amazing educational experiences she was provided.

The UM School of Law offers a J.D. concentration and an LL.M. in Air and Space Law. A certificate is also available for industry professionals who want to learn more about air and space law. Visit https://law.olemiss.edu/ to learn more.

To read more about Ms. Urban’s experience at UM, see her alumni profile.