Winter Session Students Get Close-Up Look at Government in D.C. 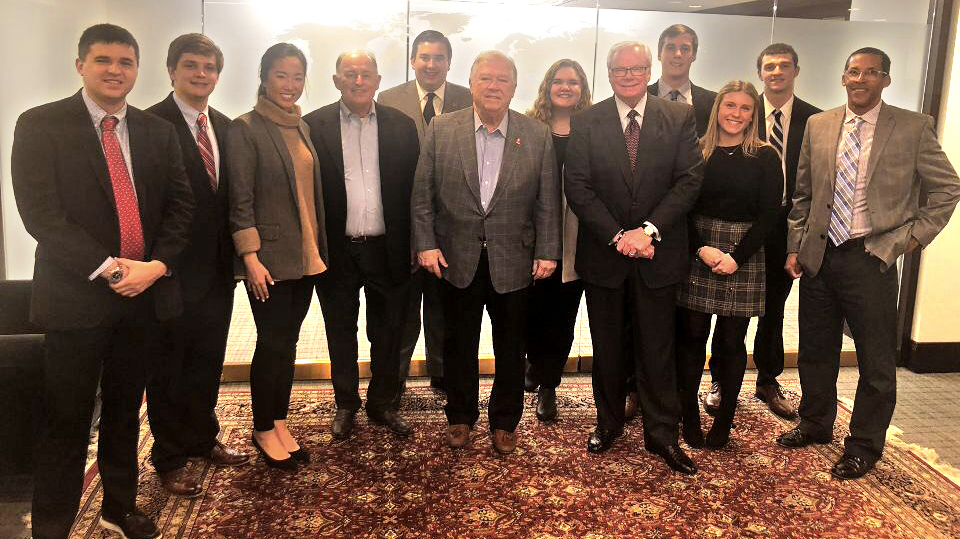 OXFORD, Miss. – While many of their peers slept in or otherwise relaxed during the winter break, eight University of Mississippi students eagerly tackled the topics of campaigns, elections and advocacy in the United States, thanks to a partnership between Study USA and the Haley Barbour Center for the Study of American Politics.

These Ole Miss students spent early January in the classroom to begin the intersession, examining how political science can inform the real-world campaign environment. To strengthen the connection with practical applications, the course culminated with a trip to Washington, D.C., where students met several professionals, including elected officials, lobbyists, campaign managers, staffers, fundraisers and more.

“The class exposes students to a far greater array of decision-makers and policymakers than students typically meet in Oxford,” said Marvin King, associate professor of political science and African American studies and senior fellow in the university’s Residential College South. “Leveraging the network effects of Gov. Haley Barbour presents our students a far richer and deeper perspective of Washington, D.C., politics and policy.”

“This year, we had another great group of students and we had a program packed with outstanding speakers,” Barbour said.

BGR, Barbour’s lobbying firm, was instrumental in making the trip happen, organizing meetings and providing access to D.C. decision-makers and other movers and shakers.

Getting to meet and interact with a range of politicians and professionals was among the highlights for A.J. Stone, of Madison, who is studying political science with an emphasis on international security studies.

“It was great having the opportunity to hear from both my state senators, Cindy Hyde-Smith and Roger Wicker, as well as the congressman representing my district, Madison County, Michael Guest,” he said. “I learned so much from all the speakers and really benefitted from this hands-on experience.”

Stone said he enrolled in the intersession course because he plans on working for the government or a private firm in Washington, D.C.

“Even if I don’t work on the Hill or am not directly involved in politics, it is important to know how politics and Washington, D.C., operate,” Stone said. “Just being in D.C. and seeing how the city operates was very helpful.

“I also learned a lot about how our government functions and, more specifically, how politicians try to get elected, which should be a prerequisite for anyone who wants to work for our government.”

Being shown around D.C. and the Capitol by a big lobbying firm is a great way to see the business and politics side of the town, said Sebastian Paez, a junior political science major from Potomac, Maryland.

“Visiting the West Wing was incredible and not an experience everyone gets when they go to D.C.,” Paez said. “Making connections with Gov. Barbour and his staff was also very helpful.”

Touring the Eisenhower Executive Office Building and being able to talk to people in high-level positions was an amazing experience for Grant Hemsley, a junior business major from Brookhaven, Georgia.

“Politics has always been something I’m passionate about and enjoy talking about since I was a boy,” he said. “The entire week, the topic of the material flowed so naturally to me.

“I really enjoyed being an environment where I could exercise my political muscle and talk about things I care deeply about. It gave me an understanding of what post-grad life looks like in Washington, D.C.”

Anica Choi said she appreciated being educated about government by the elected officials themselves.

“I met Mitch McConnell,” said Choi, a sophomore political science major from LaGrange, Georgia. “It was amazing hearing each of the speakers’ success stories and how they got there.”

As the Barbour Center, housed in the Department of Political Science, helps expose more students to the political industry, the university can build a positive cycle for students where they move from student to intern to career professional, King said.

“Students can learn more by contacting the political science department,” he said. “The Barbour Center of Applied Politics will help students really hone in on the practical aside of politics, so students aspiring to careers in D.C. or Jackson should really consider these opportunities.”

This program was run by the Office of College Programs in the Division of Outreach and Continuing Education in conjunction with Study USA. For more information on similar courses, visit https://outreach.olemiss.edu/study_usa/.