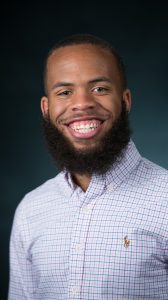 OXFORD, Miss. – Joshua Mannery, a junior at the University of Mississippi, has been named a finalist for the Truman Scholarship, a prestigious award that comes with national recognition for potential as a public service leader and up to $30,000 for graduate school.

The Jackson native’s selection from a field of more than 800 applicants means he gets to interview for one of 60 scholarships with students from across the country. But more than that, his selection affirms his passion for creating a more inclusive and accessible campus, community and country.

“Josh represents the best of our state and our university,” said Douglass Sullivan-González, dean of the Sally McDonnell Barksdale Honors College. “He comes to us with aspirations and deep challenges, and he has worked hard to engage our community as both citizen and scholar.

“He has worked with and through our Honors College Minority Engagement Club to engage our campus with hard questions concerning history and identity, and he has distinguished himself with a consistent resolve to walk toward solutions for our university’s andrepublic’s sake.”

A Leader Among Leaders

Faculty members and university leaders across campus repeatedly point to Mannery, who is pursuing a double major in political science and English, as a model of the kind of student the university should seek out.

It’s a quality that Mannery said was born of necessity after the death of his older brother, Devon, in 2016. As the second-oldest of six children in his family, Mannery said he realized his four siblings were looking to him for direction.

“Before, I was playing video games or watching TV with the door closed,” he said. “But then I realized my brothers and sister were looking to me to deliver.”

That moment was the first of many that revealed Mannery’s passion for youth development – the topic on which his Truman Scholarship application focuses heavily.

Clarity for the future

Mannery said he originally had no desire to apply for the Truman Scholarship, despite his plans to work in public service and his admiration of past Ole Miss Truman finalist Jarvis Benson.

“Public service is something I’ve always wanted to do,” Mannery said. “I didn’t need the scholarship to convince me of that.”

Mannery also said he didn’t consider his story or his accomplishments to be noteworthy.

But, through the application process, Mannery said his calling to be a public servant has never been clearer.

“I really had to think about what I want to do,” he said. “I know I want to study law, and I know where I want to be in 20 years. I want to run for president in 2036. But I wasn’t sure what was in between besides public service.”

The application process helped him map his path from the UM Associated Student Body to the White House, and all the routes intersected in the areas of juvenile justice, youth development and leadership development.

An Extensive Resume of Service

Motivations for applying aside, Mannery has quite a history of public service on campus and in the community.

As director of campus outreach, he helped plan the Open Doors event that welcomed more than 200 students into the Lyceum to meet with university leadership for dinner and casual conversation.

“He’s made big contributions toward making things better on campus,” said Aileen Ajootian, professor of classics and art. “He’s just the sort of student we need to have here.”

As a finalist, Mannery is already in rare company. The honorific alone gives him access to past finalists and scholars who have gone on to serve as leaders of government agencies, successful nonprofit organizations, powerful advocacy groups and academic institutions around the world.

Mannery is beginning preparation for his finalist interviews in hopes of being selected as one of 60 scholarship recipients.

The scholarship comes with national recognition for potential as a public service leader, access to competitive graduate programs, access to exclusive scholar programs and up to $30,000 in graduate study scholarship funding.

Mannery will join other finalists from Arkansas, Kentucky, Mississippi and Tennessee March 18 at the Vanderbilt University Career Center for finalist interviews. The winners of the 2020 Truman Scholarship will be announced April 15.