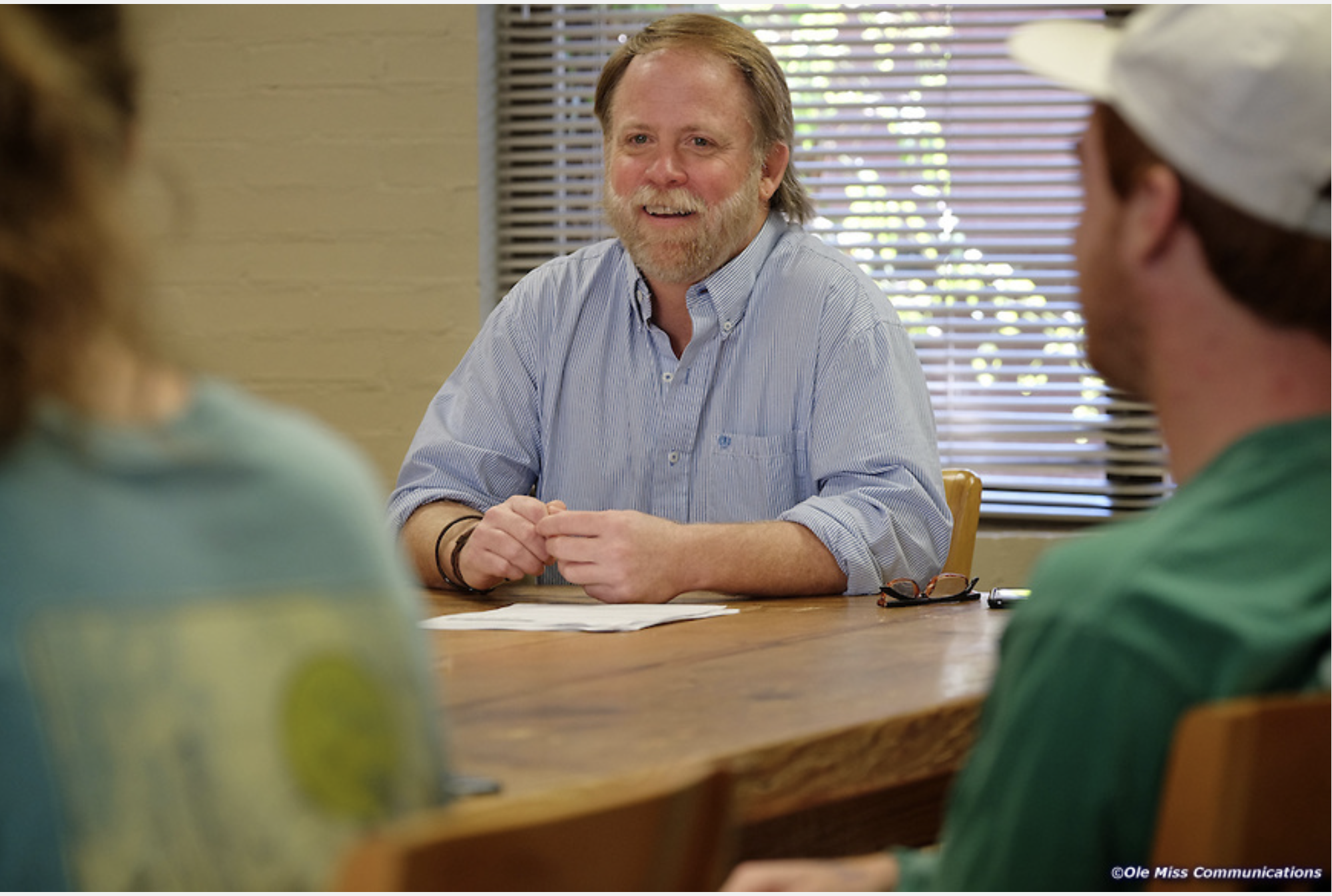 Robert Brown, who teaches in the Department of Political Science and the Sally McDonnell Barksdale Honors College, shares this year’s Frist Award for UM faculty. Photo by Robert Jordan/UM Communications

Following glowing letters of recommendation from students, fellow faculty members and parents, three University of Mississippi employees have been chosen to receive prestigious honors for their exceptional service.

The Thomas Frist Student Service Awards are presented annually to UM faculty and staff members who have “gone the extra mile” in unwavering dedication and service to students.

Two faculty recipients share this year’s honor: Donald Dyer, associate dean for faculty and academic affairs in the College of Liberal Arts and professor of Russian and linguistics, and Robert Brown, professor of political science. Whitman Smith, director of admissions, is the staff award recipient.

“The Ole Miss family is fortunate to have so many outstanding individuals who go above and beyond to serve our students,” Chancellor Jeffrey Vitter said. “All three of this year’s Frist Award recipients exemplify this core value.

“We applaud their unwavering commitment to student engagement and exceptional level of personal attention to student success. These three are very deserving of this special honor.”

Examples of exemplary service include student guidance and mentorship above and beyond those expected of faculty and staff as part of their job responsibilities. Any full-time faculty or staff member, except previous winners, is eligible for the award, which includes a $1,000 prize and a plaque. The winners also are acknowledged during the university’s overall Commencement ceremony.

Each recipient said he was surprised to receive news of his honor.

“I was also humbled and a little bit embarrassed by it,” Smith said. “I am honored to be recognized as someone who serves students. I have nothing I can compare it to.”

“When he (Vitter) gave me the news about the Frist Award, I felt incredibly honored … and humbled,” Dyer said. “This (honor) means that my interaction over the years with students has positively influenced someone.

“The success of the students I have been privileged to teach and to advise has always been as important to me or more important than anything else I have achieved as a professor.”

Brown said he is grateful to know students who have made him want to be a better teacher and better person.

“This award is a reminder of how lucky I am to be a teacher, and to work with and care about the students I teach,” Brown said. “They have given me so much, and I am glad to be able to give back to them if I can.”

The decision to choose a faculty recipient was difficult due to the stellar praises expressed for each in the nomination letters, said Luca Bombelli and Anne McCauley, both previous Frist winners and co-chairs of the selection committee.

“Reviewing nomination letters for the Frist Award is an inspiring and uplifting task because all the letters express heartfelt gratitude for faculty and staff members who have really made a difference in a student’s life,” said McCauley, assistant director of the Office of Sustainability.

“Both were so equally deserving that selecting one over the other would have involved a degree of arbitrariness that most did not feel comfortable with,” said Bombelli, chair and professor of physics and astronomy. “Therefore, we made the unusual move to recognize both of them.”

Brown, who has been nominated for the award in previous years, teaches in both the Department of Political Science and at the Sally McDonnell Barksdale Honors College.

In a nomination letter for him, one student wrote, “He has gone above and beyond as a professor, his dedication to his students shining every step of the way. Dr. Brown has visited sick students in their hometowns, gifted books to other students just because he thought they would enjoy, and has become a faithful campus voice outspoken against sexual assault.”

When the student had doubts about her career path, “He sat with me and compiled a list of possible majors, helped me schedule appointments with deans and professors in each department, showing up to introduce me to each of them.”

Dyer, who had multiple nomination letters written by both students and faculty, was commended by a colleague for “having taken the language and linguistics programs to exceptional heights.

“He has always been supportive of new ideas and innovations in teaching languages, including less commonly taught languages, such as Russian, Chinese, Japanese and Arabic. Thanks to his hard work, professional and personal skills, the Department of Modern Languages has achieved great success, national and international recognition and respect.”

A student wrote that Dyer’s service has included funding graduate students’ trips to conferences in Idaho and New Mexico, teaching more than his required number of courses when necessary and even teaching a much-needed summer course for free as a gesture of good will.

“Dr. Dyer leads by example; he is ready to do what is best for the students and the university,” the student wrote.

In a nomination letter for Smith, written by the parents of a UM student, he was praised for having “rewritten the playbook” for the role of admissions director.

“Whitman went well beyond introducing students to the university and helping them acclimate to the college environment,” they wrote. “He built a relationship with (our son). Had it not been for Whitman and his ceaseless encouragement and open door, he may not be graduating in May.

“Whitman’s voice of reason and understanding encouraged him when it seemed nobody else could.”

The parents noted Smith has “a deep passion” for working with Ole Miss students.

“More than once, we have phoned Whitman at home and on his cell number after office hours. Whitman consistently goes beyond the role of a director of admissions, providing guidance and mentorship that serve students like our son every single day.”

All three recipients said they plan to give their stipends back to the university.

“I plan to give it to the Department of Modern Languages to help students in need of financial support to study abroad,” Dyer said.