Tim Ford, former Speaker of the Mississippi House of Representatives, was awarded the University of Mississippi Distinguished Alumni Award in Public Service. 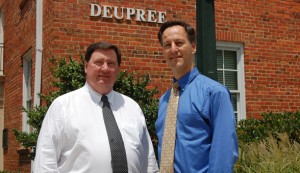 “We are proud to recognize Tim Ford,” said Richard Forgette, former chair of the Department of Political Science. “Tim has had a long distinguished career in state government. He served as Speaker of the Mississippi House for sixteen years. Tim is greatly respected on both sides of the aisle – Republican and Democrat. His public service has made a great difference, not only in terms of his community, but to the State of Mississippi and the University of Mississippi.”

Ford graduated with a B.A. degree from the University of Mississippi in 1973. He went on to attend the University of Mississippi School of Law and graduated with a J.D. in 1977. After obtaining his law degree, Ford served as a law clerk for the Presiding Justice of the Mississippi Supreme Court and then as an assistant district attorney. He was elected to the Mississippi House of Representatives in 1980 and was elected Speaker of the House in 1988. He served as Speaker until his retirement in 2004. He holds the distinction of being the second-longest-serving Speaker in Mississippi history.

“Tim deserves this award because of his long time tenure as a leader in Mississippi politics and his undying support for the University of Mississippi,” said Andy Mullins, chief of staff to the chancellor and associate professor of education. “So much of the good change that has occurred at this university has come through the support of people like Tim Ford. He has been a friend to the university and a friend to those of us in the administration who have advocated for various changes to make the university a more international university rather than just a regional one.”

During his tenure as Speaker, Ford was known for his ability to hold the House together, in spite of partisanship pressures and a newly diverse chamber. He was recognized as a powerful leader who left the Legislature stronger than when he arrived.

Ford is the first House Speaker in the nation to receive the William M. Bulger Excellence in State Legislative Leadership Award. The award is conferred every other year on a state legislative leader who has worked to preserve and build public trust in the institution of the state legislature and whose career embodies the highest principles of leadership. Ford was also given the Mississippi Supreme Court Chief Justice Award in 2003.

Ford feels that the University of Mississippi helped him in his career.

“At Ole Miss you meet the future leaders of the state,” he said. “The friends and contacts that you make at Ole Miss will determine how successful you are in your future, because you are literally going to meet everyone who runs the state.”

Balch & Bingham recently pledged to give a donation to the Department of Political Science. This donation will create a scholarship that will allow students to participate in a legislative internship.

“The Tim Ford Public Service Scholarship will help University of Mississippi undergraduates learn about their state and about the state legislature, a befitting recognition of Tim Ford’s career,” Forgette said. “This scholarship, once endowed, will contribute to the academic experience of future undergraduates at the university.”

Forgette said that the scholarship allows the political science department to improve its curriculum.

“As part of this state legislative internship program, we are also creating a service learning class that we will be piloting this fall in which students will be role-playing as state legislators,” he said. “We will have a series of state senators coming in to talk about the state legislature and about issues facing the state of Mississippi. From that experience we will select the legislative interns. So this is not only recognition of Tim and his career, but this is how we are changing and improving our curriculum.”

Ford hopes that the internship will give insight into the inner workings of the legislative process.

Ford encourages other alumni members to stay involved with the university.

“If you don’t stay involved you are really missing out on so many activities and fun things that are going on in your university,” he said. “Just coming back to this campus and seeing it reinvigorates your interest in it. You visit other campuses and they just aren’t as manicured and stately as this university. I’m probably prejudiced, but that’s still the way I feel.”