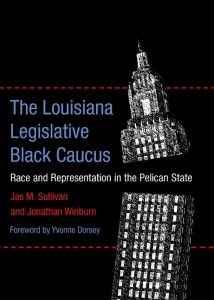 Sullivan and Winburn ask why the LLBC has the lowest bill-passage rate among all the groups in the legislature at the same time their Democratic party holds the majority. The inability of the LLBC to form coalitions across party lines and even inside their own party limit its effectiveness, the authors contend: though LLBC members vote together more often than any other group in the legislature, their bills rarely receive support from outside the caucus. The issues faced by the LLBC’s constituents often fail to garner enough support from white Democrats, a group more closely aligned with their Republican colleagues.

Based on years of research and extensive interviews with caucus members, The Louisiana Legislative Black Caucus offers a deft analysis of minority representation in Louisiana that helps explain why, four decades after the LLBC was established, blacks continue to lag behind whites on key social and economic indicators in the Pelican State.

About the Authors
Jonathan Winburn is an assistant professor of political science at the University of Mississippi.

Jas M. Sullivan is an assistant professor of political science and African and African American studies at Louisiana State University.