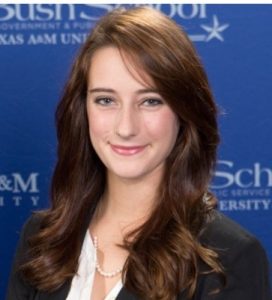 “I was never very interested in political science until I had an AP American Government teacher who was incredibly engaging and inspiring. He piqued my interest and encouraged me to pursue political science as a way to better understand our political system and how people and nations relate to one another.”

An avid traveler, Sailer studied abroad for two summers in Amman, Jordan, and studied for a fall semester at the University of Edinburgh, Scotland, where she learned about sustainable development and political theories of global justice and citizenship. Sailer’s education was enriched through an internship with Syria Direct, a NGO providing news and assisting journalists reporting about the war in Syria, a research internship with the Hudson Institute’s Center for Political and Military Analysis, and a fellowship with the non-profit Mississippi Sustainable Agricultural Network. Her undergraduate honors thesis research focused on the impacts of water scarcity on intrastate conflict and U.S. national security.

After graduation Sailer spent the summer in Cairo and Amman to further her Arabic skills. She is currently earning her master’s in international affairs with national security and diplomacy track in the George Bush School at Texas A&M, and is interning at the National Defense University’s Eisenhower School. Sailer hopes to bring together her national security and humanitarian interests in a role working for the federal government in international affairs.

Why study political science at UM? “UM has such a wonderful legacy of valuing the liberal arts. Political science remains critical especially for those who want to pursue public service and tackle the most complicated social and political problems of our day. The department is a comfortable size, and a student can be as engaged as they want owing to the amazingly knowledgeable and professional faculty. They are great mentors, particularly in utilizing the unique history and political situation of Oxford and Mississippi to teach lessons for the future.”