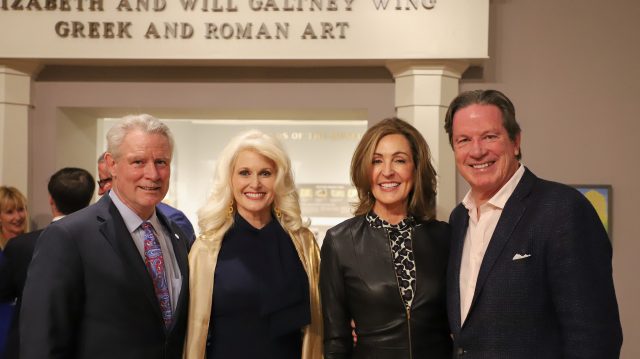 The museum’s oldest artifacts have a new home, thanks to the Galtneys’ 2018 gift to the museum that established the Elizabeth and Will Galtney University Museum Greek and Roman Antiquities Fund.

The Galtneys, who live in Houston, Texas, and have a home in Taylor, were joined at the Oct. 22 dedication ceremony by family and friends, including members of the Friends of the Museum, and UM Chancellor Glenn Boyce and his wife, Emily.

“Today, we celebrate Elizabeth and Will’s love of the arts and culture, their generosity and the impact they continue to have to strengthen Ole Miss’ mission to create opportunities and broaden the experiences of students, teachers, researchers, alumni and friends,” Boyce said at the event.

The Galtneys’ support makes it possible for the museum to reinstall and reinterpret the renowned David M. Robinson Memorial Collection of Greek and Roman Antiquities.

The Robinson Collection is recognized as “one of the finest university collections of its kind in the nation,” Boyce said.

Much of the material was brought to the university as the personal collection of Robinson, a world-renowned archeologist and professor who first taught at Johns Hopkins University and later Ole Miss. The Robinson Collection contains more than 2,200 sculptures, terra cotta and bronze artworks, decorated pottery and coins and a variety of artifacts from 1500 B.C. to A.D. 300.

Due to space constraints at the museum, the collection has been something of a hidden treasure.

Only 5-10% of the collection has been open for public viewing at any given time,” Boyce said. “Because of the Galtneys’ generous support, the University Museum will be able to increase access to the collection at least threefold.”

While the Galtney Greek and Roman Art Wing is open to the public, the massive project to reinstall and reinterpret the antiquities continues, said Robert Saarnio, director of the University Museum and Historic Houses.

The project is expected to be substantially completed by late 2022 and a Scholar’s Symposium, also supported by the Galtneys’ gift, will feature prominent scholars, antiquities specialists, conservators and faculty when it is held, Saarnio said.“The new wing and symposium enrich our university’s research and academic excellence, elevate our institution and enliven the academic discourse on our campus,” Boyce added.

The Galtneys have provided major support to a number of academic and athletics entities at the university, but the museum and the arts are particularly special to them, said Elizabeth Galtney, who serves on a variety of boards and commissions focused on the arts and culture in Houston.

“The UM Museum is where our passion and hearts are,” she noted at the ceremony.

Elizabeth Galtney is a graduate of the University of Texas, where she majored in art history and painting.

Will Galtney, a Jackson native who earned bachelor’s and master’s degrees from Ole Miss, said he and his family proudly support the university’s arts and museum.

“The UM Museum contains some incredible collections, and we hope others will join us in supporting the arts at Ole Miss,” he said.

The Elizabeth and Will Galtney University Museum Greek and Roman Antiquities Fund is open to gifts from individuals and organizations. Checks, with the fund noted in the memo line, may be mailed to the University of Mississippi Foundation, 406 University Ave., Oxford, MS 38655. Gifts can also be made online by visiting https://give.olemiss.edu.