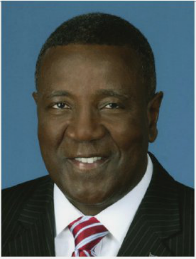 The highest annual honors for alumni who have made an outstanding contribution through good deeds, services, or contributions, admitted retired Maj. Gen. James E. Donald of Atlanta to the University of Mississippi Alumni Association Hall of Fame in 2012.

Donald, former chairman of the Georgia Board of Pardons and Paroles, earned the Bronze Star for his bold leadership as a task force commander with the 101st Airborne Screaming Eagles during Gulf War I. He achieved strategic successes as deputy commanding general for the U.S. Army Pacific and two tours of duty in the Pentagon. He was appointed commissioner of corrections in December 2003.

In 2009 Donald was sworn in by Georgia Gov. Sonny Perdue to a seven-year term on the State Board of Pardons and Paroles and was subsequently elected by his colleagues to serve two consecutive terms as chairman.

A Jackson native and a 1970 graduate of UM with a B.A. in political science and history, Donald earned a master’s degree in public administration from the University of Missouri.