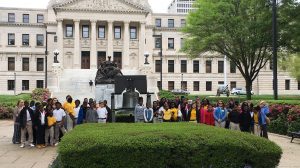 The UM McLean Institute and Department of Political Science collaborated to take fifth-grade students from Charleston Middle School on a field trip to the Capitol in Jackson during the legislative session.

OXFORD, Miss. – Dozens of middle school students have gotten a close-up look at their state government in action this spring, thanks to the Kids in the Capitol program, developed by the University of Mississippi’s McLean Institute for Public Service and Community Engagement and Department of Political Science.

The goal of the outreach project was to increase political awareness by taking fifth-grade students from Charleston Middle School on a field trip to the Capitol in Jackson during legislative session. Daniel Fudge, a McLean Institute graduate fellow, and Sue Ann Skipworth, an instructional assistant professor of political science, collaborated on the program.

Fudge said he developed the idea based on his own experience as child in Arkansas, when his class was taken to the state Capitol in Little Rock.

“I can recall sitting up in the gallery and being mesmerized at watching policy in action, knowing that the work done in the legislative chambers could impact the lives of many across the state,” Fudge said. “That memory has stayed with me throughout the years and I wanted a chance to give that same opportunity to students right here in Mississippi.”

The project was funded by both the McLean Institute and the political science department.

“In learning more about the poverty levels in the Delta and combining this with my personal desire to help educate young students about the political process, I helped to forge a partnership with the McLean Institute and the Department of Political Science,” Fudge said. “This allowed me to put this trip together and give the fifth-grade class of Charleston Middle School the opportunity to see their government in action, meet their legislator and, furthermore, see the state capitol.”

The students were given an architectural and historical tour of the Capitol building, allowed to sit in the gallery for the House and Senate to witness the political process firsthand and met with their district representative, Tommy Reynolds.

“This outreach project was successful on many fronts,” Skipworth said. “It was an opportunity to expose students to a different environment. For many of these students, the largest town they had been to was Grenada or Batesville, so it was quite an experience to see a much larger city like that of Jackson.

“The success of this outreach project would not be possible without the help of the political science department and the McLean Institute, as well as the administrative staff and teachers at Charleston Middle School.”

Skipworth hopes to have continued support from the Department of Political Science and the McLean Institute to carry the project forward for many years.