A.J. Holloway, Biloxi mayor, is recipient of the 2012 Distinguished Alumni Award  for the University of Mississippi Department of Political Science. 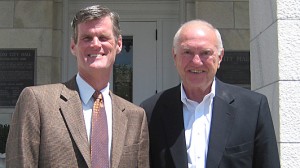 Using money from private donors, the university also has established the A.J. Holloway Fund to provide academic and research support for the department.

“A.J. Holloway not only was a great athlete at Ole Miss but he has been an outstanding leader in his hometown of Biloxi where he grew up,” said William Winter, Mississippi’s 58th governor. “I regard him not only as my cherished friend, but as one who has brought honor to Ole Miss.”

The developmental fund will provide resources for both faculty and students.

“The fund can serve as seed money to a larger research grant or help fund research-related travel. It can fund student travel or internship costs, and help cover unexpected academic expenses,” said John Bruce, chair of the political science department. “The Holloway Fund plays a crucial role in developing and supporting the academic mission of the department, allowing us to help our faculty and students reach ever-higher levels of scholarship.”

Holloway has served as mayor of Biloxi for nearly 20 years. He was thrilled upon learning that the fund was created in his name.

“It surprised me that I was even thought about since I’ve been gone from the university for so long,” Holloway said. “I look forward to it and my family and I think it’s a great honor.”

A Biloxi native, Holloway graduated from Ole Miss in 1963 with a B.A. in education. During his time at the university, Holloway played for the 1960 football team, which was named national champions by the Football Writers Association of America. He competed in two Sugar Bowls and a Cotton Bowl.

“During the time I played for the team, we lost one game and tied one game with LSU,” Holloway said. “We beat them one time. I scored the winning touchdown in that game.”

Holloway remembers his time at the university fondly.

“There were people who made an impact on me in the classroom and on the football field,” he said. “I made many friends over the years there.”

After graduation, Holloway moved to Columbus to teach. After two years, he moved back to Biloxi and served as business manager for the public school system. He also served on the Mississippi Tax Commission before being elected mayor of Biloxi in 1993.

Holloway was integral in pulling the city together after the devastation of Hurricane Katrina.

“The defining moment of my time as mayor was when Hurricane Katrina came through,” Holloway said. “It just about leveled the whole city. The whole east end of the city was underwater. People were walking around in a daze in the streets; they didn’t know what to do.”

Just days after the storm, Holloway began the long process of rebuilding. He marshaled city departments, used state and federal aid and implemented a plan to clear the city of debris. Six months after the storm, Holloway announced the “Reviving the Renaissance” initiative, prompting nearly 200 residents to help craft a blueprint to guide the city’s rebuilding efforts in a way that recaptures the successes of the past.

“As soon as it stopped raining and everything settled down, we started cleaning up,” Holloway said. “We lost about 5,000 structures in Biloxi, but the people were strong and they were ready to go to work. We’re still rebuilding today.”

“I think that A.J. has been an extraordinary mayor,” Khayat said. “Having a plan and leading through an event like Katrina is being a visionary. That’s somebody who is emotionally and mentally invested in the city of Biloxi. Everything I know about him is positive and I think that his life has been exemplary, therefore he is an appropriate person to name an endowment after.”

“A. J. Holloway is a fantastic example of a distinguished alum,” Bruce said. “He excelled as both a student and athlete while enrolled at the University of Mississippi, and he has continued to excel in the years since. His dedication to public service is remarkable, as is the universal praise for his long tenure as mayor of Biloxi.”

Former Lt. Gov. Brad Dye is on the alumni advisory board that selected Holloway for the award.

“A.J. is an outstanding example of strong leadership at the local level,” Dye said. “His excellent stewardship during and after Hurricane Katrina, and his competent development of Biloxi as a major gaming resort attest to his ability in leading his city.”

Bruce has high expectations for the fund.

“The Holloway Fund is the type of resource that can have profound impacts on the careers of both our students and our faculty,” he said.

A reception honoring Holloway was held November 9, 2012 at the Oxford-University Club.

Donations to the fund can be made online. Make reference to the “A. J. Holloway Developmental Endowment” if donating by credit card. Contributions also can be mailed to the Department of Political Science, University of Mississippi, University, MS 38677, Attn: Holloway.