Through floor debates and committee votes, students learn ins and outs of Legislature 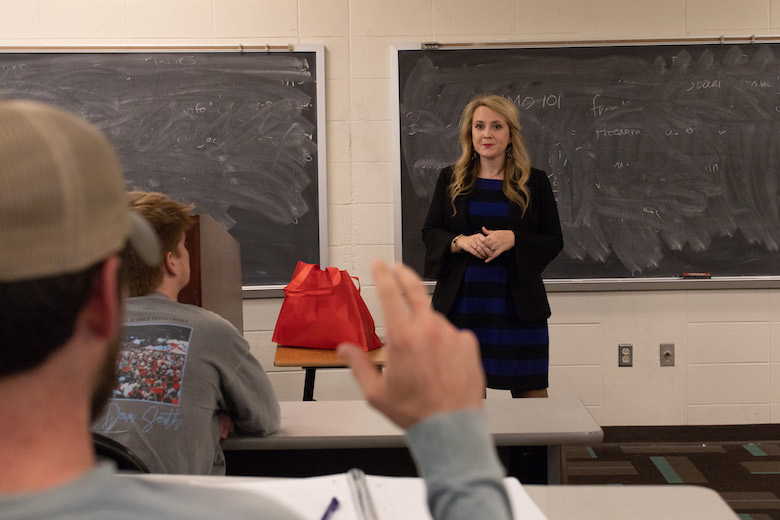 Neal Lancaster wanted to gain practical knowledge about how the Mississippi Legislature functions. And thanks to an immersive University of Mississippi political science course aimed at preparing future state legislators, that’s what Lancaster is getting.

The senior political science major from Corinth is among 18 Ole Miss students enrolled in POL 399: Model Mississippi State Legislature. The course offers participants an opportunity to expand their understanding and deepen their appreciation of the state legislative process.

Divided into two components, the course includes a student-led simulation based on the Mississippi Senate in which students research, write and debate legislation. It also allows them to meet and listen to guest speakers from state agencies/departments whose work is relevant to the legislative process.

“Experiencing everyone’s input during the first floor debate really showed how complex and intricate it can be to pass an agreed-upon version of any bill,” said Lancaster, who represented his home district on the finance committee. “Our main bill was a lottery bill, which we passed out of committee and are currently in the floor debate phase trying to hammer out an amended version of the bill.”

Sue Ann Skipworth, instructional assistant professor of political science, divides the students into the finance and education committees. During the committee phase, the students discuss new potential ideas and rule out old ones, only to come full circle back to the old ideas after further debate. While Skipworth does advise on certain issues, the whole process is essentially self-guided by the students.

This semester, Lancaster and his classmates met with guest speakers Liz Welch, secretary of the Mississippi Senate; Emelia Nordan, college savings plans and policy director of the Office of the State Treasurer; and David Pray, evaluation division manager at the Mississippi Legislative PEER Committee. Meeting and discussing issues with the administrators has proven invaluable to the students.

“I wanted to take the course because I thought it would be fun and it would further develop my knowledge of the legislative process,” Lancaster said. “Not many people may realize truly how much discussion goes into passing bills to potentially become the law.”

Nordan said the students have been eager to learn.

“For most, there was an evident thirst to learn more and to truly understand,” Nordan said. “It has been a delight to meet them all, and I look forward each year to being asked back.”

Welch said she, too, has been impressed with the students’ participation.

“Students were very bright and asked lots of questions,” she said. “We actually used some of the students as senior pages (university students who serve as interns for legislators); impressive group every time.”

Skipworth and Welch have discussed having the class visit Jackson for the legislative session, which typically runs from January to April.

“I think that is a great idea,” said Welch, who has been a guest lecturer for seven years. “I think is always helpful to experience the real process versus reading about it.”

As state political discussions remain prevalent, Nordan said it’s especially important to expose students to such an important issue like the legislative process.

“These students may very well be the future leaders of our state,” she said. “Equipping them with the knowledge of how our state operates is important not only because they may being doing the job one day, but also because by knowing the process you know how you can make a difference.”

For more information about the UM Department of Political Science, visit https://politicalscience.olemiss.edu/.