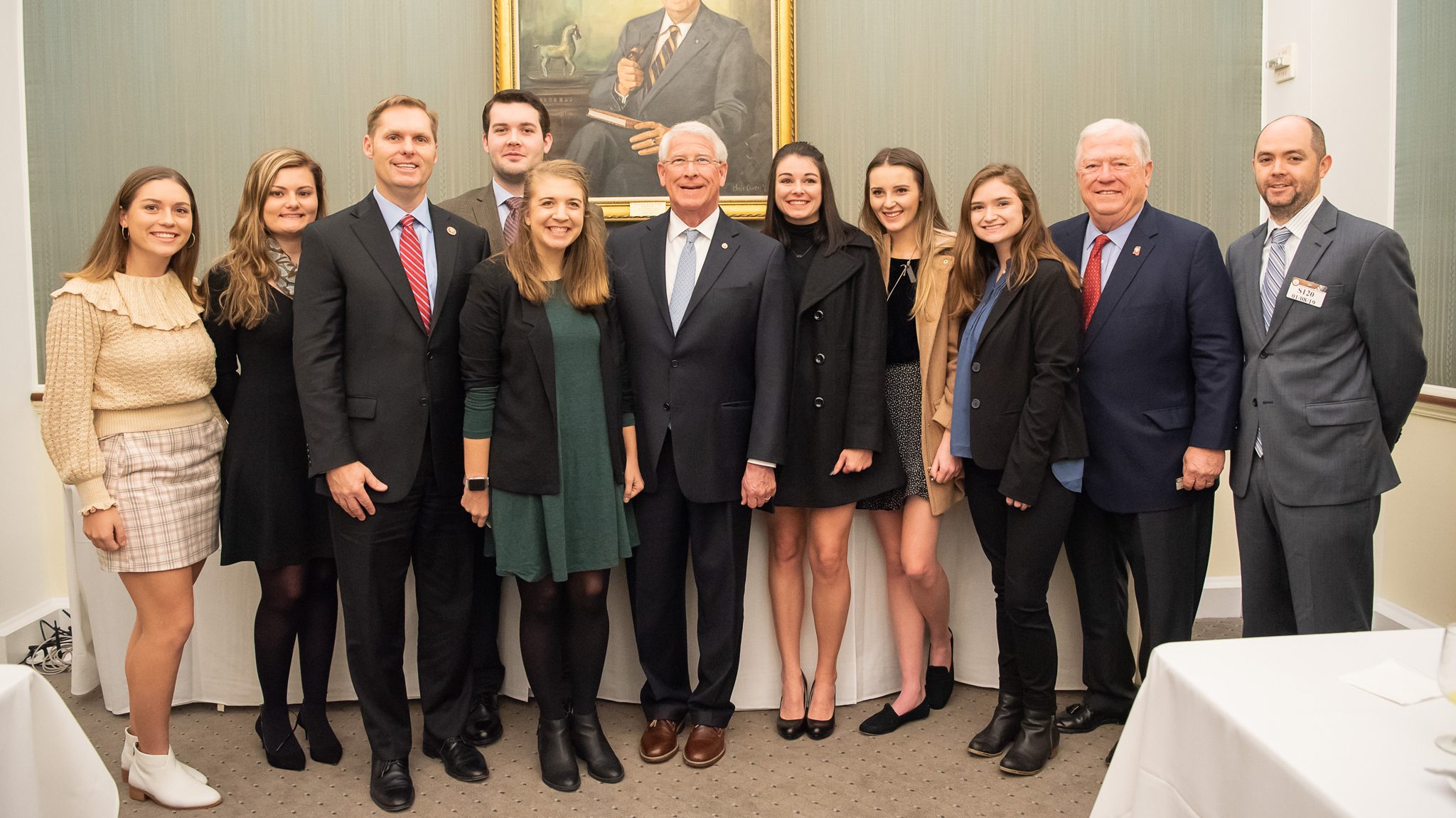 OXFORD, Miss. – University of Mississippi students recently got an insider’s view of Washington’s political scene and mingled with movers and shakers there as part of the first class offered through the Haley Barbour Center for the Study of American Politics, which was created last fall.

During winter intersession, seven UM students studied applied politics with Conor Dowling, associate professor of political science. Dowling’s students spent some of the class time on the Ole Miss campus, and the rest in Washington.

The Barbour Center is named for Haley Barbour, a UM alumnus and a major architect of national politics who served two terms as governor of Mississippi.

“There were important networking opportunities for the students to hear about internship and other job opportunities they might be interested in,” Dowling said. “Overall, the course provided the students with a truly unique opportunity to learn about the various parts and pieces of the political apparatus required to run a modern political campaign in the United States.”

The Barbour Center draws from the faculty of the Department of Political Science, College of Liberal Arts and the rest of the university, as well as connections to those working in politics. Students participate in a range of topics and experiences to prepare them for engagement in the American electoral process as citizens or as political party activists, paid campaign advisers or electoral process managers.

The center’s mission is two-pronged. The first focus is academic, including an endowed chair and a series of courses to advance students’ knowledge and interest in campaigns and elections. A second focus is outreach, including bringing high-profile speakers to campus and hosting national conferences and summer outreach programming.

The center also will provide some funding for graduate students.

The Barbour Center is a testament to the university’s commitment to advance the study of campaigns and elections in the United States, said John Bruce, UM chair of political science. The center will advance an academic mission, including opportunities such as the applied politics course, as well as an outreach effort that will share its understanding of campaigns and elections with the public, he said.

“The courses that the center supports will include a focus on applied politics, and this D.C. course was no exception,” Bruce said. “Students received an academic foundation and then had the chance to have extensive contact with practitioners in the field. This firsthand exposure will be a strength of the department’s offerings in this area.

“The Barbour Center will enhance the types of experiences we can offer our students, while simultaneously increasing the visibility of the Department of Political Science.”

Former Gov. Barbour said the maiden voyage for the center was a “striking success.”

“While I am very honored to have the center and the endowment named for me, the biggest thrill for me was to see these students get immersed in real campaign and elections political science,” Barbour said. “The speakers/teachers were a superlative group of some of the best-known political operatives from both parties as well as from think tanks, trade associations and super PACs.

“The students loved it. We hope it will inspire each of them to have an active life in politics, whether professionally, as candidates or as volunteers.”

Cally Perkins, a senior political science and paralegal studies major from Hernando, got a lot out of the class, she said.

“The course was a great opportunity to network with people that are the most successful in a political career,” Perkins said. “It was eye-opening to learn about all the different career paths there are in political science. It really helped jump-start my life after graduation. I would do it again if I could.”

Bailey Griffin, a junior political science major from Midlothian, Virginia, said the class was extremely rewarding because she got to meet movers and shakers in Washington. There were other benefits, too.

“The class opened my eyes to many different sectors I could get involved with post-grad,” Griffin said. “This class was in a unique setting because we got to get firsthand, personal experiences on what it is like to work in Washington.

“Gov. Barbour allowed us to network and get our names recognized by some of the most influential people in Washington, and I will be forever grateful for that.”