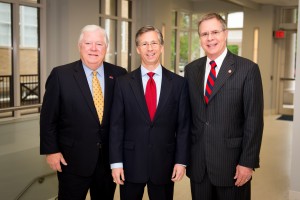 OXFORD, Miss. – AT&T has donated $100,000 to help establish the Gov. Haley Barbour Endowment for the Study of American Politics at the University of Mississippi Department of Political Science.

AT&T is one of the first major corporations to contribute to the fund that will support a new faculty position led by a prominent American politics scholar. The initiative to create the endowment was announced last fall.

“We’re fortunate the University of Mississippi recognizes the importance of preparing the next generation of policymakers with thought-provoking education and exchange of ideas. AT&T is pleased to recognize Gov. Barbour’s successes and accomplishments with this well-deserved endowment.”

The Department of Political Science and the University Foundation established the endowment to honor Barbour in perpetuity, for recruitment and retention of outstanding faculty and to ensure quality teaching, research and service are available for future Ole Miss students.

The campaign goal is to raise $1 million for initial efforts. While $1.5 million is the standard goal to endow a chaired faculty position, the University Foundation has set a goal of $2.5 million.

“This gift from AT&T is an extraordinary vote of confidence in the work of our political science department and in the legacy of Gov. Barbour,” UM Chancellor Jeffrey S. Vitter said. “Developing sound policy solutions that can impact many requires a world-class education, and our graduates must be ready to understand and solve countless domestic policy issues.

“We thank AT&T for contributing to this endowment in honor of Gov. Barbour at the University of Mississippi. Their generosity underscores our approach to political science studies that is important to our campus and to public policy across the state.”

Barbour is a former two-term governor and remains one of the nation’s top political strategists. His handling of the Gulf oil spill and Hurricane Katrina, when he worked with local, state and national leadership to assist victims, received widespread praise.

He is also the author of “America’s Great Storm: Leading through Hurricane Katrina” (University Press of Mississippi, 2015), which explores leadership during a crisis.

“My life has been accentuated by numerous efforts to provide students with opportunities to successfully compete in the political arena and in any field rooted in public service,” Barbour said. “There is no place I want to do that more than at my alma mater, Ole Miss.

“If we can attract the brightest scholars, that will only benefit the young people who have so much to offer our great state and nation. I’m humbled by this endowment in my honor and look forward to strengthening the academic reputation of the University of Mississippi.”

This endowment is open to gifts from individuals and organizations. To contribute, send checks with the Gov. Haley Barbour Endowment noted in the memo line to the University of Mississippi Foundation, P.O. Box 249, University, MS 38655; contact Denson Hollis, senior director of major gifts, at 662-915-5092 or dhollis@olemiss.edu; or visit http://www.umfoundation.com/makeagift.